BREAKING: FRSC Corps Marshal Redeploys Senior Officers, Others in a Massive Shake Up

The Army Spokesman confirmed the Minister’s commendation of the troops of the Nigerian Army for their commitments and the obvious achievements recorded so far in the fight to end the insurgency and assured them of the support of the government of President Muhammadu Buhari in the area of providing necessary logistics and platforms for the troops in the mission area to crush the insurgency soon. 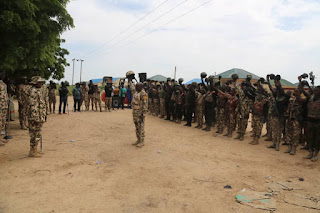 According to him, ” With the caliber of well trained, experienced and committed senior officers that I see here, I have no doubt that you are capable to effectively prosecute this war to the end. After the briefing, the minister was conducted to a tour of selected locations at Magumeri where he inspected the ongoing project at the Super Camp of the Special Forces Command in Chabbol and visited Sector 3 Operation Lafiya Dole in Gubio where he addressed the troops.

According to the minister, “What we have now compared to 2015 is an indication that a lot has been achieved. I am here, on behalf of the President to let you know that we appreciate you and we are with you and nobody has abondoned you”. “I wish you successful operations so that in no distant time we will end this war”. He assured the troops that whatever is needed to end the insurgency, the Nigerian government is ready to provide to the troops. “We will give you the best and the best is expected from you”  further stated while addressing the troops of the Sector at Gubio Super Camp. Major General Bashir Magashi further charged the troops to carry out their operations with utmost professionalism, loyalty and respect for human rights. 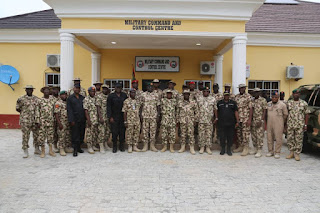 Moreover, the Minister and his entourage accompanied by the Chief of Army Staff Lt Gen TY Buratai, representatives of the Chief of Defence Staff, Chief of the Naval Staff and the Chief of the Air Staff as well as Directors of Army and Airforce Ministry of Defence, Dr Hassan Abdullahi and Mr Peter Ashibel Utsu also visited the wounded troops at the 7 Division Military Hospital and Services in Maimalari Cantonment on Sunday 1 September 2019.